Over the Sandstone Hills and back (Part One)

As kids growing up in the old Transvaal we were quite snooty when discussing the then Orange Free State, and joked about "those black and white lines above the veld that were the days and nights following one another across the boring landscape."  Only the Free Staters liked their province, and we regarded it as a part of the country one had to cross on the way to the Cape and back.

Last week Terri and I had the opportunity to check out the territory with fresh eyes and attitudes hopefully matured during the past four or five decades.  We'd previously been to Clarens, and I'd taken a fleeting look at some of the immediate countryside, and liked what I saw.  After some deliberation we opted for four nights at Ficksburg, home of the Cherry Festival, held there in November each year.  We selected a guest house, had an argument about attitude with their agents, then booked directly with Die Kersiehuis (The Cherry House) in the village, and hoped for the best.

Soon after leaving Pietermaritzburg I saw that there would be no pictures of the Drakensberg that day.  The sky was a blinding white and a haze denser than a London fog allowed us just glimpses of the outlines of the mountains.  Must be better on the other side, I tried to encourage myself, as the trip involves travelling around the Berg to reach the western side along the border between Lesotho and the Free State.  I did manage one shot at Little Switzerland on the Oliviershoek Pass.  Just one. 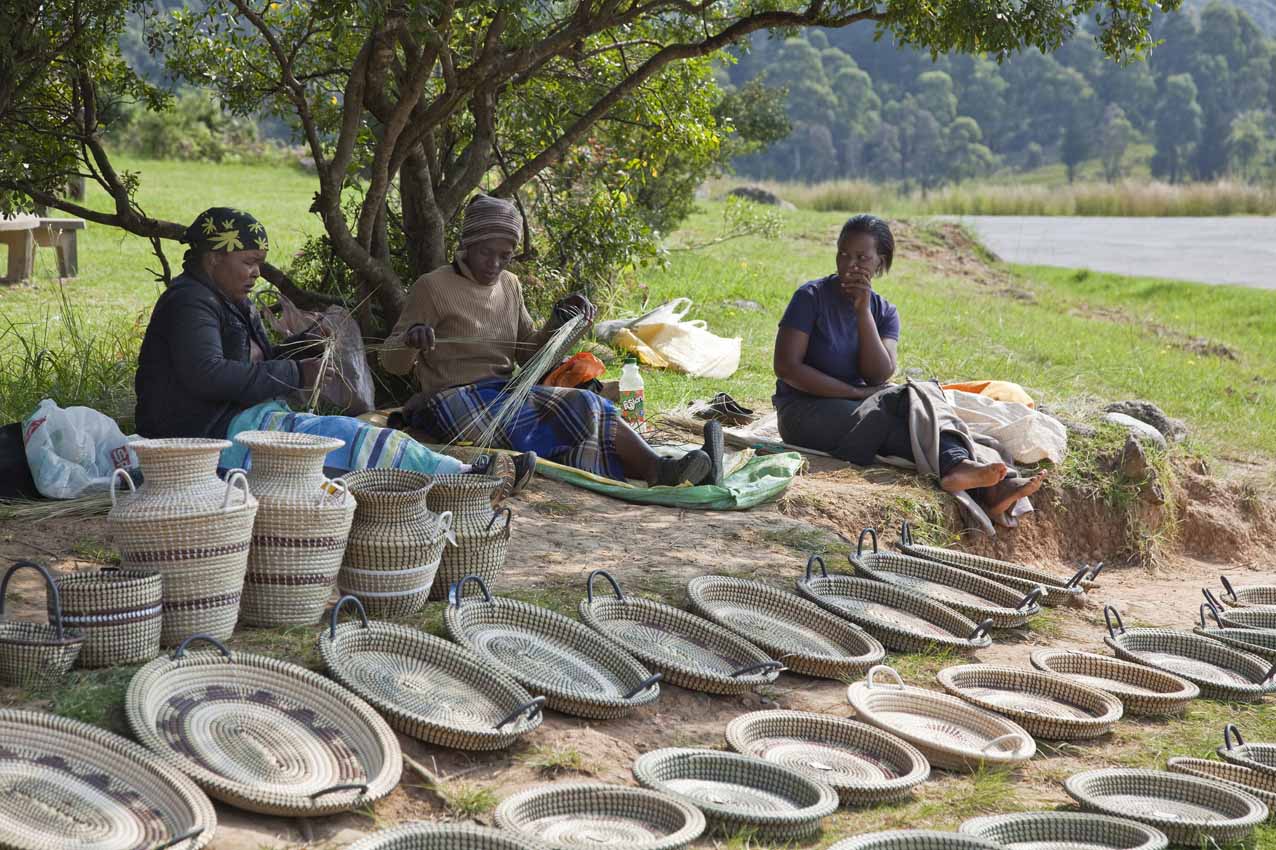 Local weavers producing the most beautiful baskets and trays.

A fifteen-kilometre detour along roadworks beside Sterkfontein Dam (Strong Fountain Dam) didn't help matters, and the haze thickened.  I knew then that Photoshop would have to prove itself all over again.

By the time we passed Phuthaditjhaba, a large settlement at the turn-off to Witsieshoek and near the entrance to the Golden Gate and Bontebok Nature Reserves, I'd become desperate, stopped the Pathfinder at the side of the road, and rummaged about for tripod, camera and lenses.  After all, poor photos were better than no photos if I could blame the weather.  We were close enough to the flat-topped sandstone hills for some definition, and I was keen to see what could be made of the conditions. 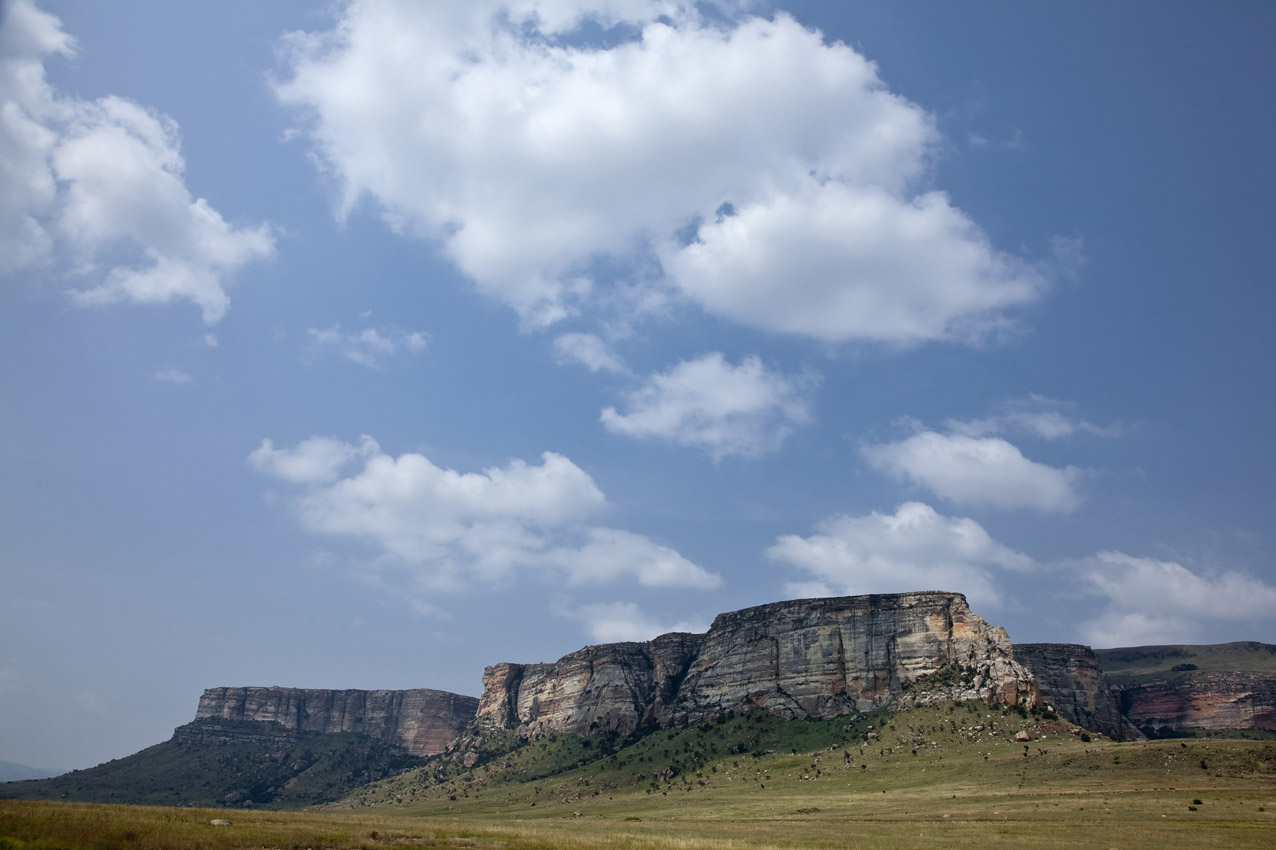 Here I have to thank everyone at Adobe Photoshop and Lightroom

Of course the display on the back of my camera didn't look anything like this, but in for a penny, in for a pound, and look what happened. 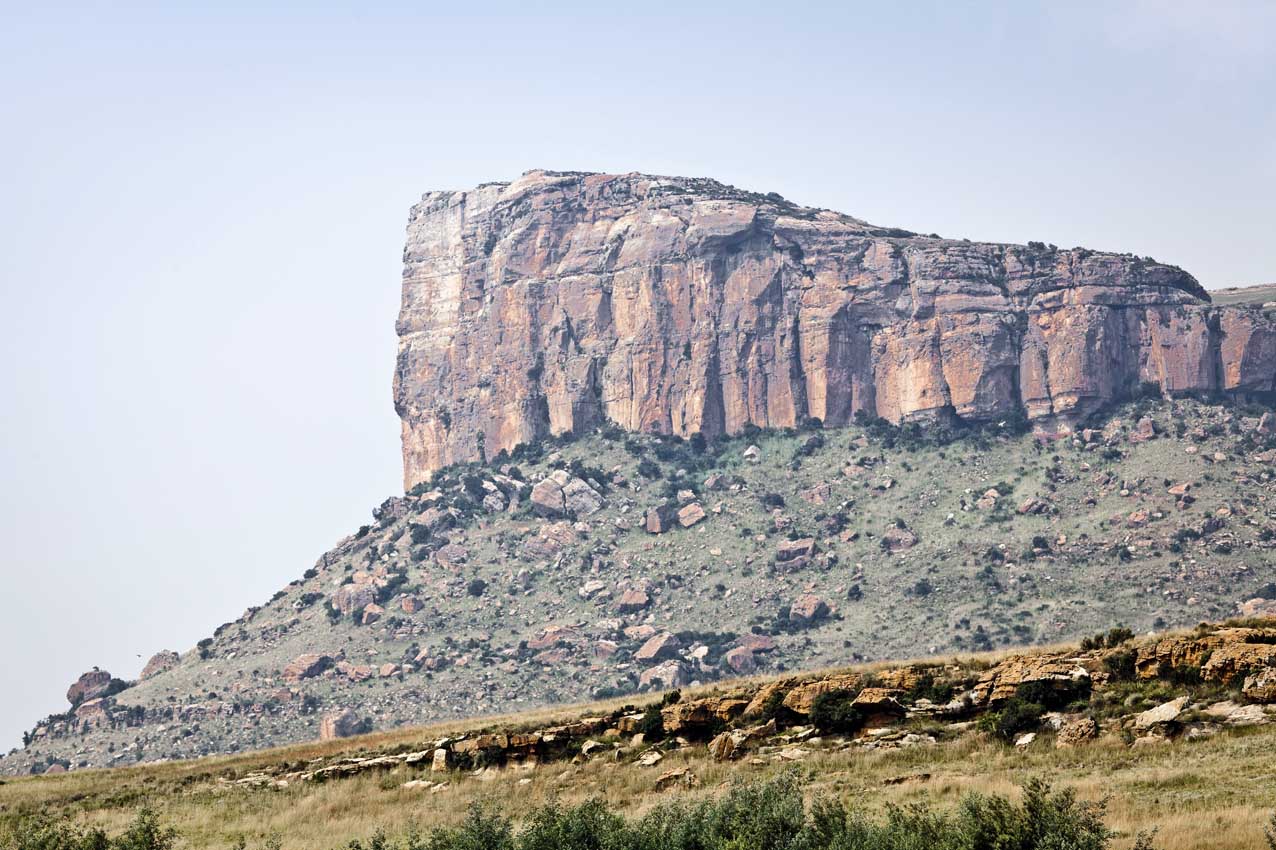 I could almost touch the skepticism and derision of motorists driving past me as I bent over the tripod, stood back, looked again, and finally hit the shutter button.  Well, Hah!  So much for those steering wheel experts.  I'd begun to feel more confident, so I threw caution to the winds, and tried a panorama.

And they all drove past without giving this spectacle a second glance.

Soon after this we entered the Golden Gate and Bontebok Nature Reserves, and started the climb to Golden Gate and the Eastern Free State Highlands.  A short twisting pass kept my eyes on the road until we reached one of several lookout points.

This being the end of the growing season, the veld grass was at full height, and often I couldn't get a view over the growth.  If you can't lick 'em, join 'em.  The grass stems and seeds were gorgeous. 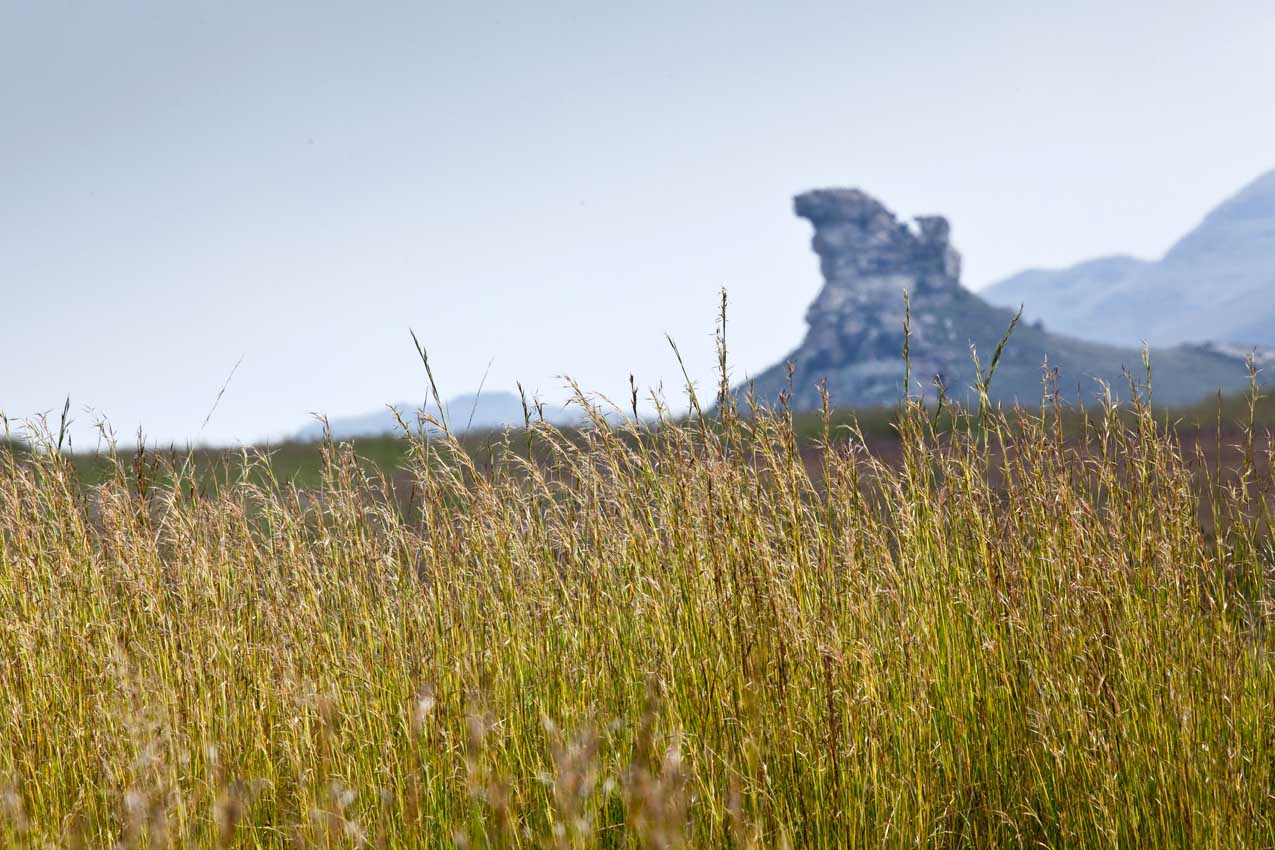 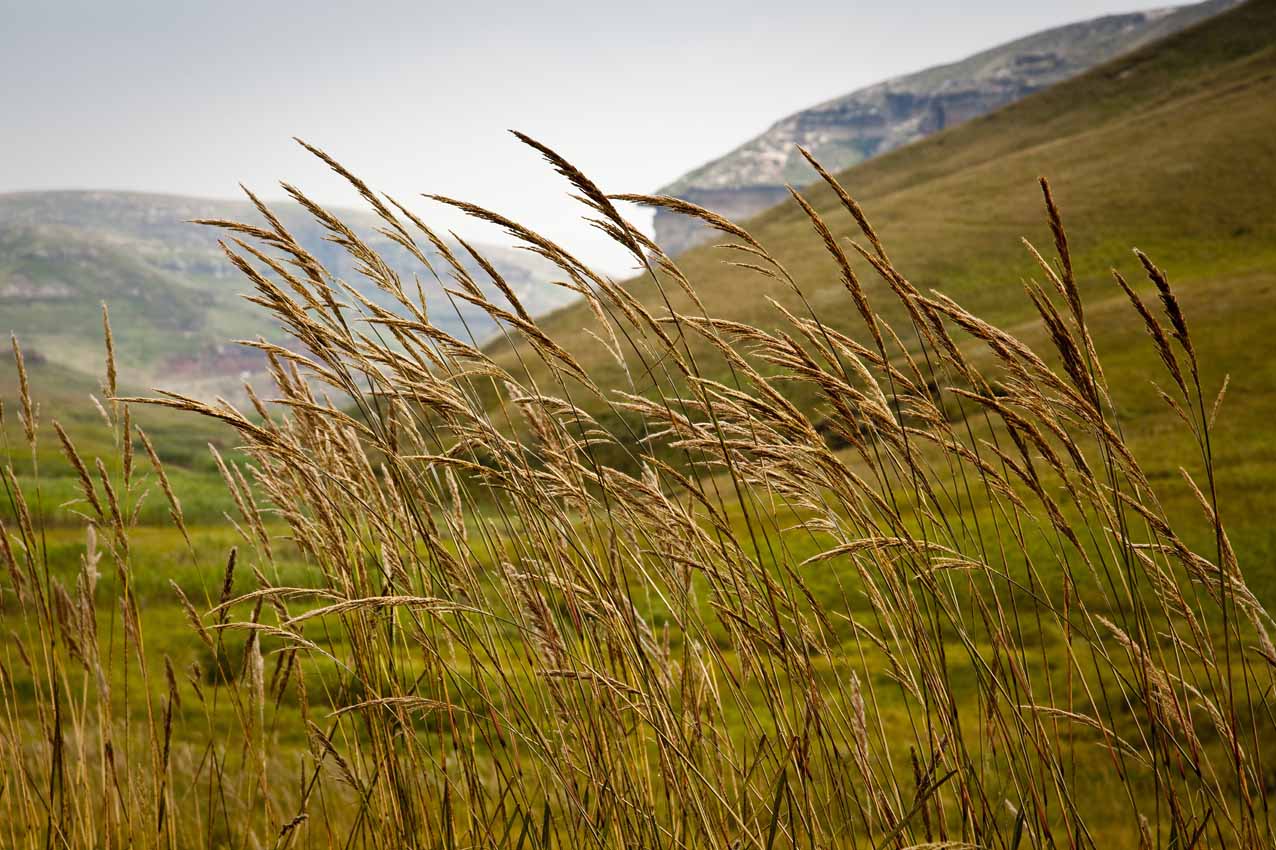 The sandstone formations of the hills were astonishing, so rugged and imposing.  I had some trouble setting them to some sort of scale, and finally chose to use roads and cars, much against my instincts. 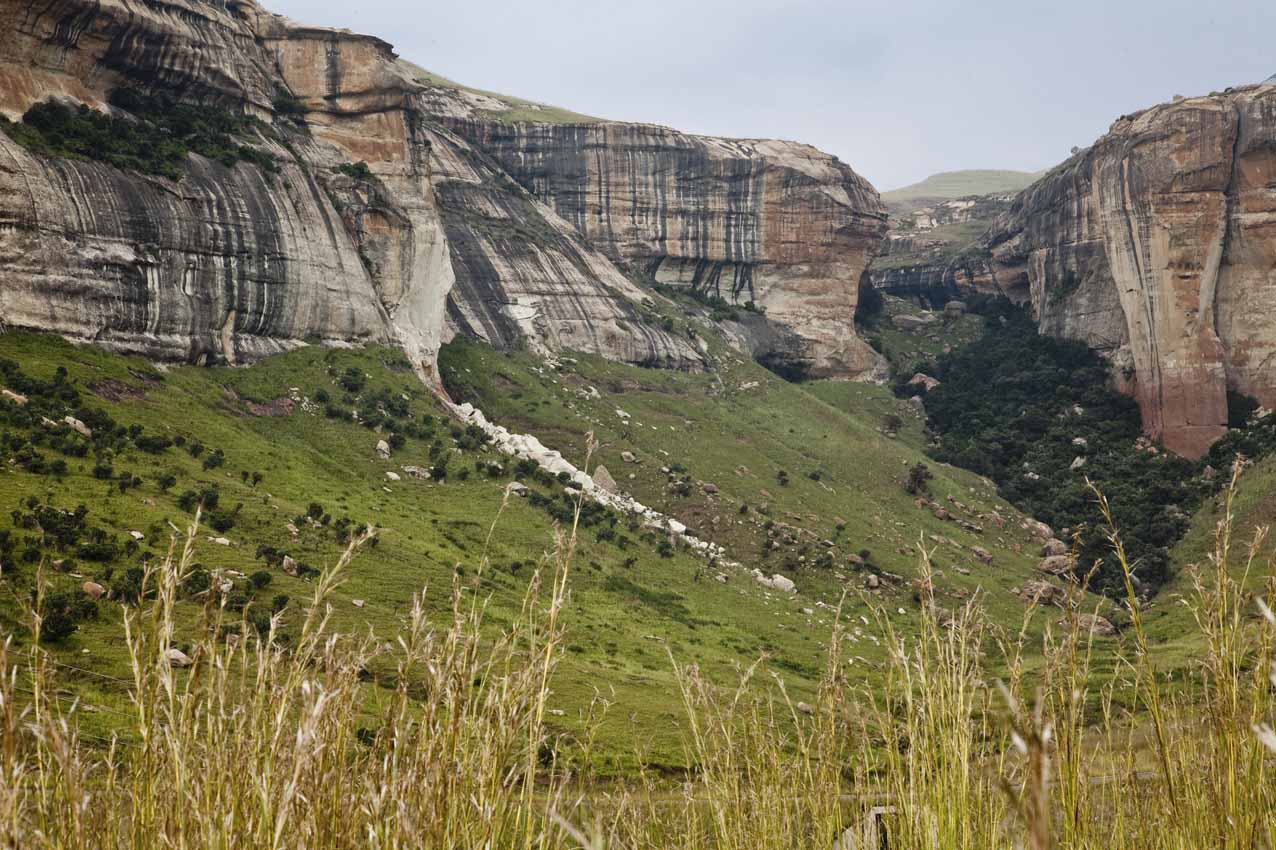 I decided to compromise, the road and bridge just visible through the grass.

Soon afterward we stopped at the Golden Gate / Nature's Valley area to look around and make the obvious and very necessary trip to the small isolated building in the middle distance.  There's good self-catering and camping accommodation available, with a National Parks office on hand.  The camping and hiking facilities are really good, and close by lies the Golden Gate Hotel for those who prefer to shun the spartan lifestyle. 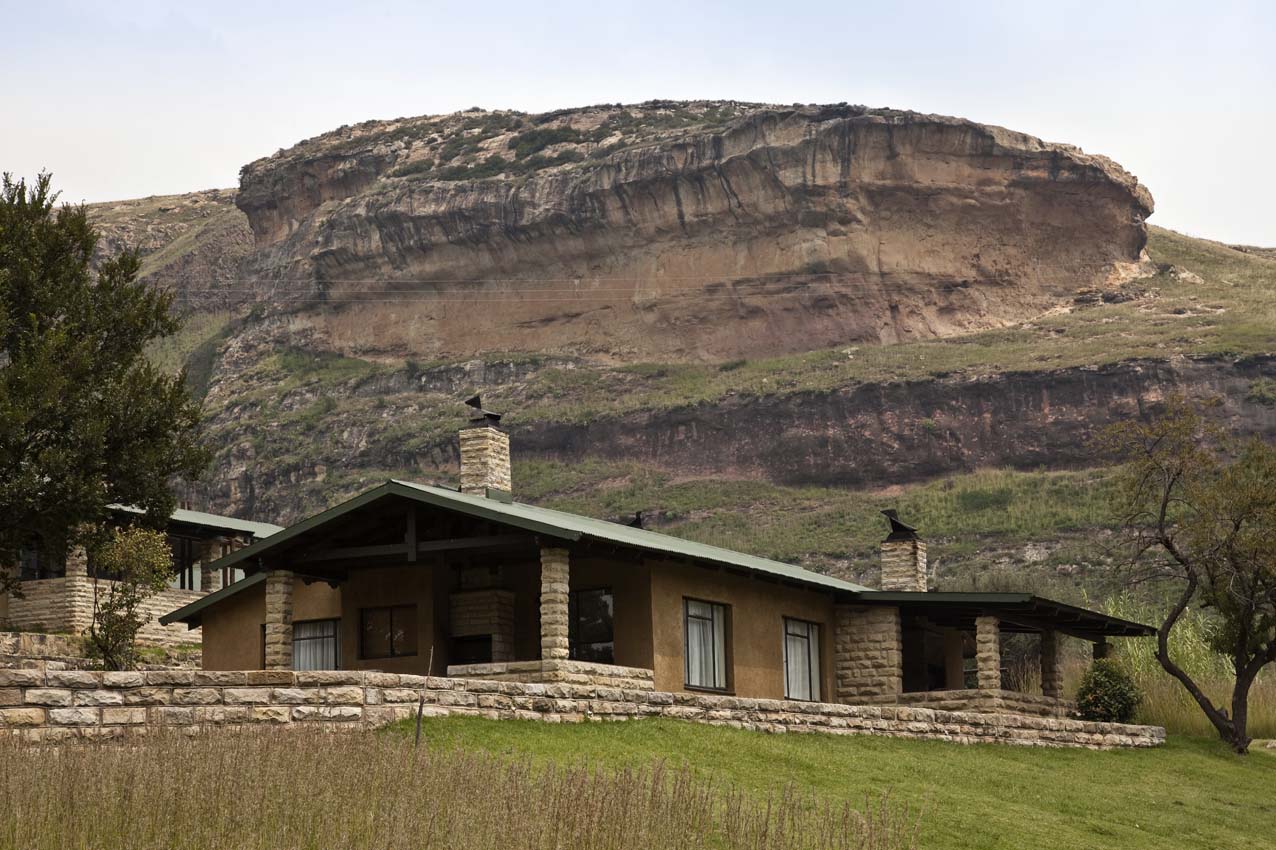 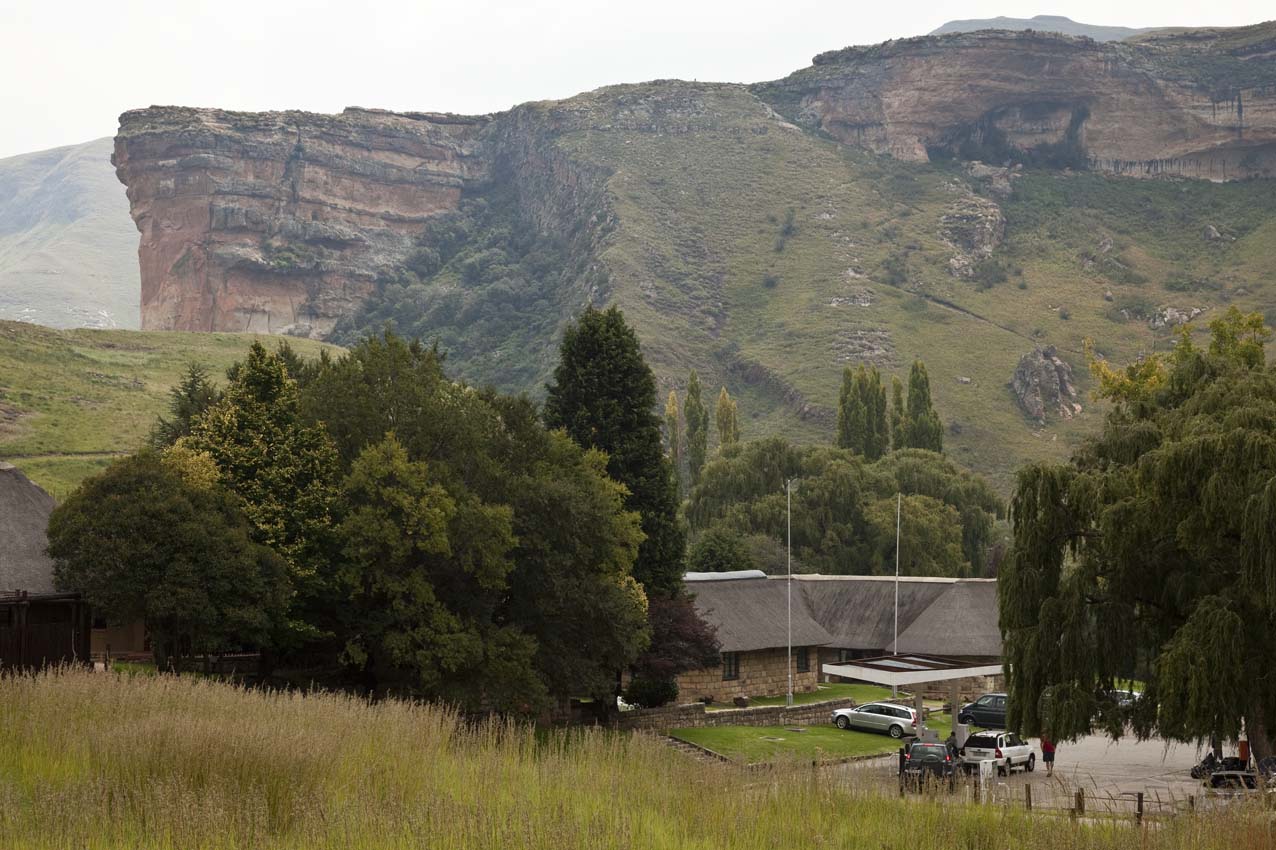 Although the setting is lovely, the much-published shots of Golden Gate are misleading as they all show the same sandstone cliff, mostly from the same angle, and within a minute of two's driving, it's been left behind.  It all happens in a very short distance, and the trick is to watch for the interesting stuff.  Like the horses eagerly waiting to be sat on again. 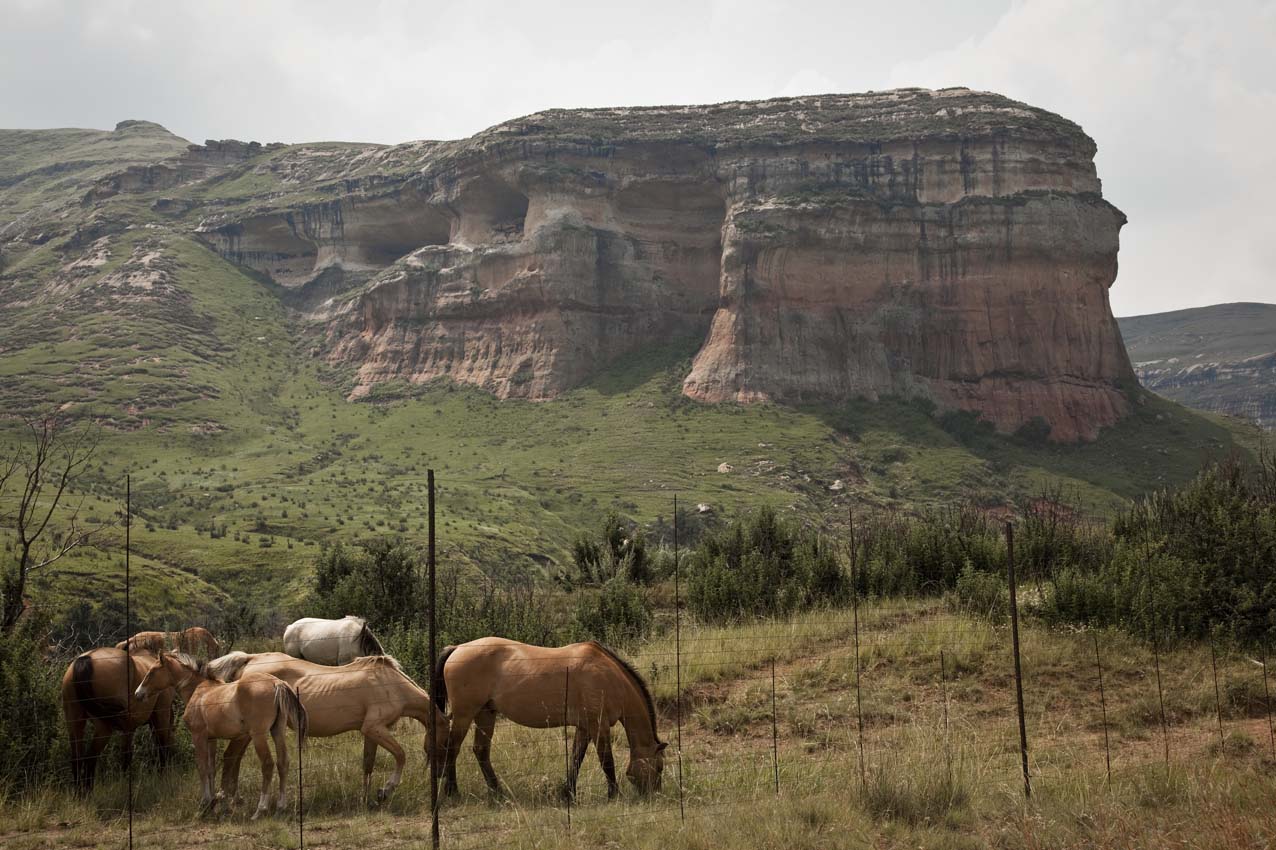 There's always something to see.  Just look.  And then take another look.  It's there.

Just getting into Autumn, the Cosmos has sprouted and flowered along many of the roads.  Although not indigenous to Africa, it makes a spectacular show in flower, and is cultivated in gardens all over South Africa.  It's native to North America, and its seeds arrived here in horse and cattle fodder imported in the late nineteenth century.  It's one of those flowers loved by many artists and loathed by just as many others. 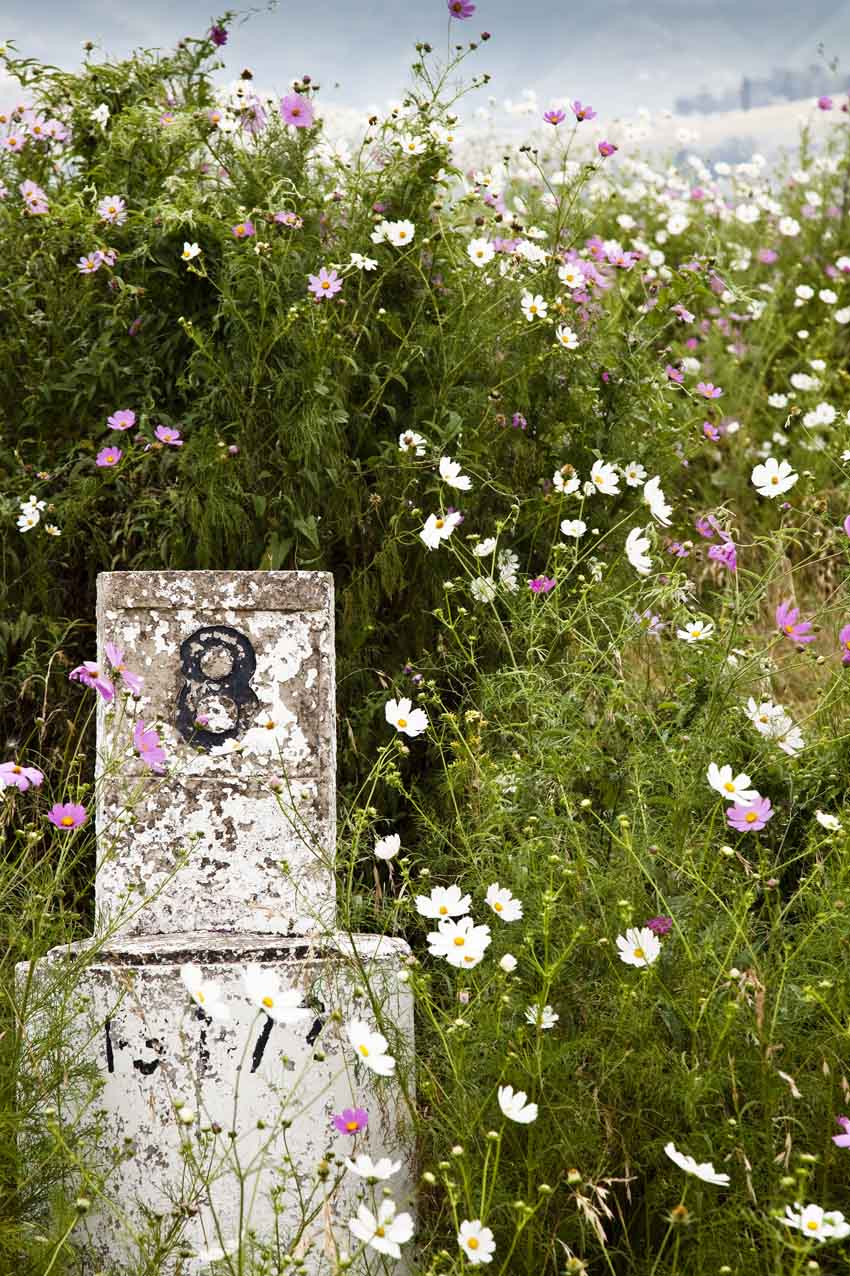 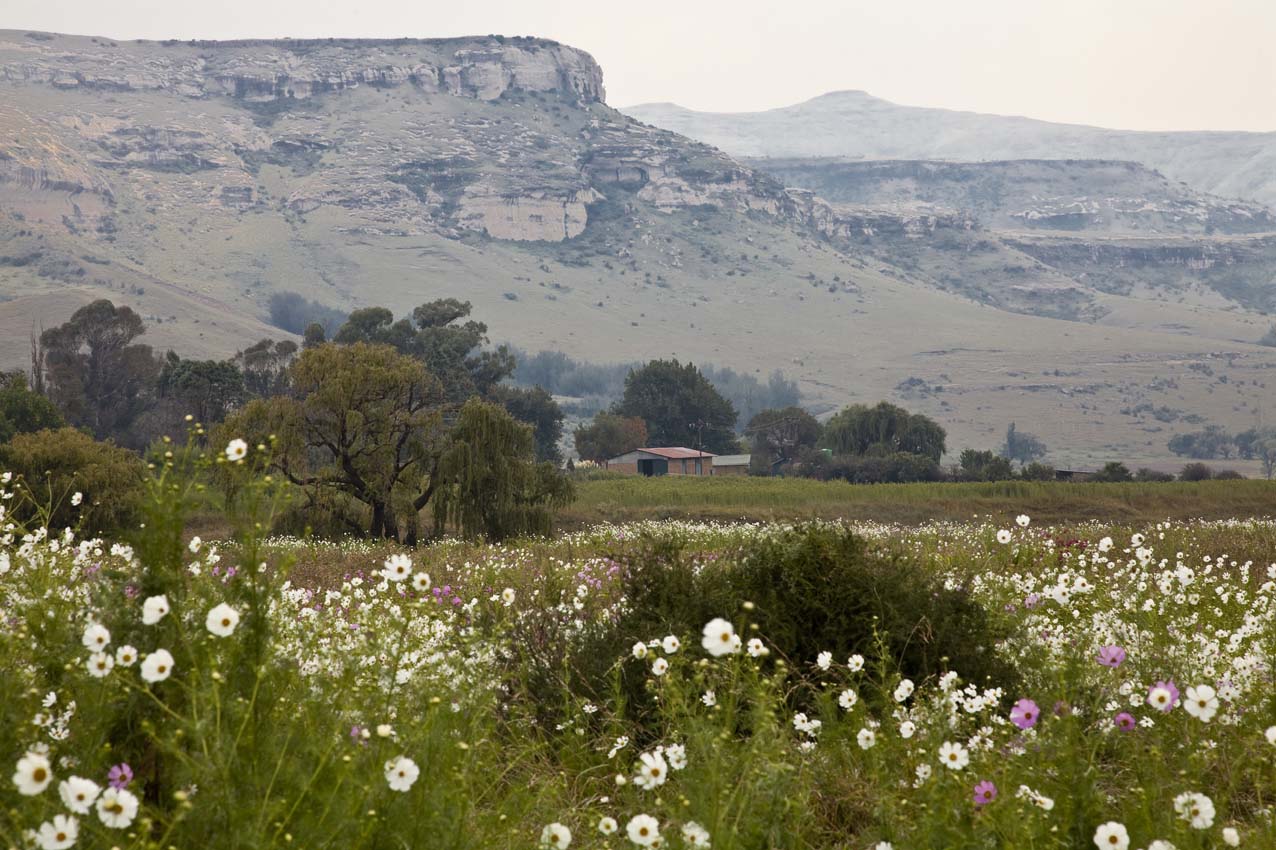 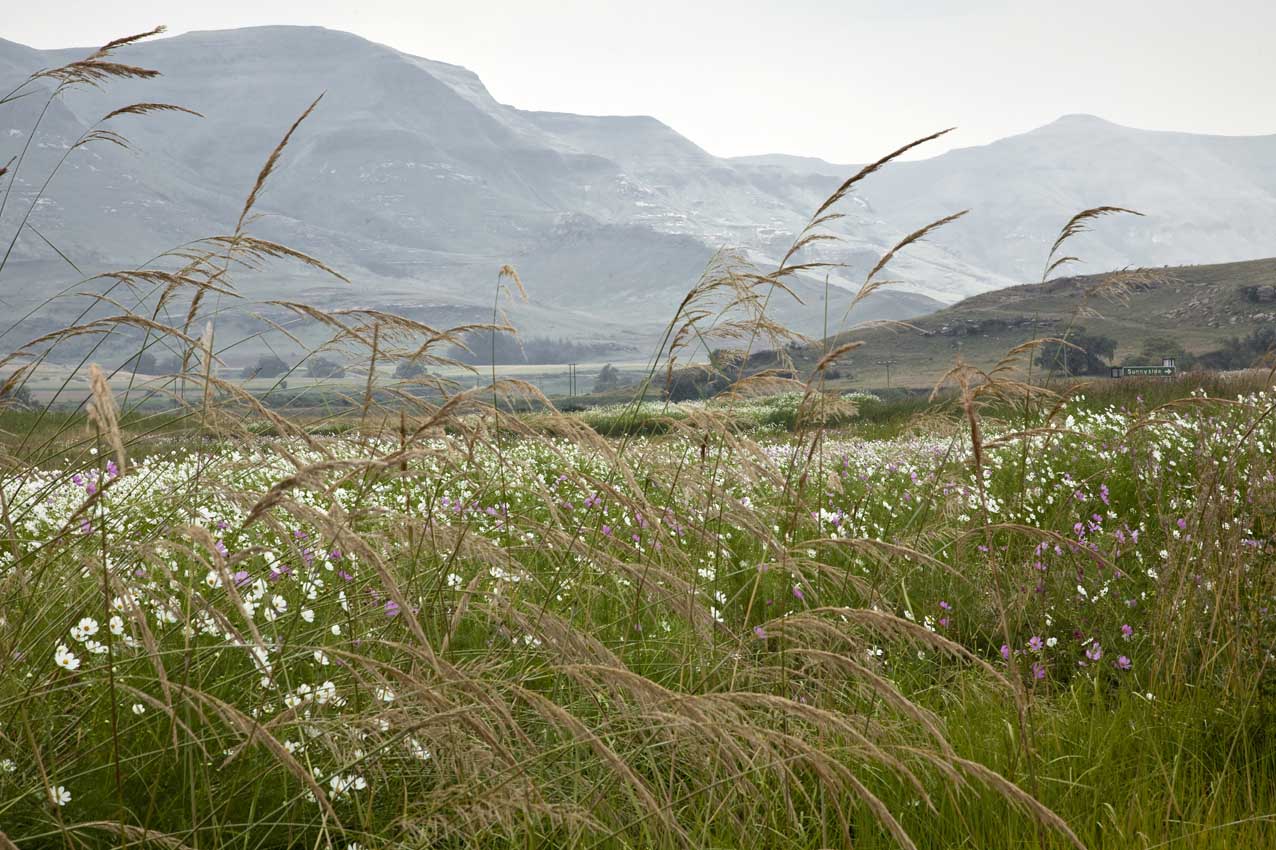 Next along the road was the Art centre of the Free State, Clarens.  We drove into the village, but on a weekend day ninety percent of Johannesburg is there, scrapping and competing for parking spots, restaurant tables, bar stools and spectators, while displaying ostentatious hairstyles, garments, manners, vehicles and motorbikes, disobeying all the rules of the road and many of those of civilised society, and generally making life unpleasant.  We'd already seen their dangerous and inconsiderate antics on the roads as far away as Phuthaditjaba.  Not for us; we decided we'd call in on the way home to be able to see something other than egotistical exhibitionists.

Stay with us on this mini-odyssey; there's more to see, including some places that very few people know about ...........

Simons comment - Doug,   Some very nice stuff here.  Can see what you emant re the mean light and skies. Comments 3) Looks rather blown 4) Great pan (how many shots??) 6) Worried about the hill, maybe it should have been the focus? 7) Super 8) those damn skies 9, 10, 11) ditto 12) apart from the sky my favourite!! Well done 13 and 14) Those damn skies again.  otherwise great. Cheers S

Waiting for Part Two ... - It may not be properly indigenous but I love cosmos and your shots are beautiful (as Simon said the only thing that would improve the last two shots was the sky but there was nothing you could do about that).  My favourites are the grass shots.  I am not concerned about the sandstone hill in the background (6) being out of focus, the grass is and that is what your blog is referring to.  Love it and can't wait for Part Two.

part 2 ...... when? - That was a nostalgic photograhic journey. Enjoyed the trip. I know what you mean about those egotistical people. we have a lot of them here too.

I was suggested this web site by my cousin. I'm not sure whether this post is written by him as no one else know such detailed about my problem. You are incredible! Thanks!

Hello, i feel that i saw you visited my website thus i gott here to �go back the choose�.I am attempting to tto find things to enhance my site!I suppose its ok to use some of your ideas!!