Art in the Park

I remember feeling a keen excitement at getting the news that I’d been accepted for Art in the Park 2015.   I’ve always regarded the exhibitors as a select group, able to produce work of a standard that we all admire and forlornly aspire to equal if not to outdo.   What a sense of satisfaction and fulfilment must go with creating a piece that someone else would see as beautiful enough to have in his home, and pay money for it.   Year after year I visited the exhibition, feeding on the ideas, the energy, the creativity and the sacrifice that went into the art on show, enjoying some while turning away from others.   But then art is subjective, and even those of us unskilled in the discipline have a right to an opinion.

For several years I’d been photographing plants and flowers in my own way, liking the results and the presentation I achieved with my unique system of lighting and framing.   I confess that I enjoyed the positive comments that my work elicited from accomplished artists and photographers.   Thus encouraged I expanded my portfolio and could eventually display a fair variety of digital images that showed our indigenous plant life in its subtlety and majesty, no matter how mighty or puny the plant.   I approached each plant with the same respect, endeavouring to show it to its best advantage.   Many of my efforts, I think, succeeded, some failed and were discarded and tried again.

I reached the stage where I went scouring the veld in search of particular plants in what I believed to be their flowering times, bringing home blooms and foliage that sadly graced the table in my spare bedroom while I prepared the lighting and camera.   Once viewed through the lens, however, those cut flowers assumed a life they’d never known in nature.   Of a sudden a flower would fill the frame, its colour flaming brightly, leaves greenly supporting the stems, and all the while the whole being arranged to show off the lines and drama that we miss when we see these things in the wild.   It would embrace the white wall as the background that I gave it, the colours bold and subtle, the detail complete and sharp, the product a contribution both to science and to art.

The proof of the pudding, however, was always the canvas print that appeared in a cardboard tube delivered at the gate in due course.   A feverish inspection would provide approval or disappointment, but by that stage disappointments were rare.   What a joy it was to see the product of my imagination and the splendour of nature spread out on the table before me, a tiny excerpt from the world at large given a new life for the consideration of however many would see it.    I began to regard it almost as a duty to present our floral kingdom to those who hadn’t seen it, and the portfolio grew apace.   I have to admit that the mere doing of it gave me the deepest pleasure.

And then I heard that I’d been included in that group whose work was open to the scrutiny of the public; the judgement of the “man in the street.”      That alone was a good feeling and I found myself looking forward to June and the carpet of leaves at the edge of the park.   By that time the artistic drive had become entwined with the need to earn from the endeavour, and the race was on to be a success.   I had no idea how many pieces would be reasonable and took a guess, selecting, framing and sleeving as I went along.

The big day arrived and I presented myself with my merchandise and began the process of setting up for the five day show.   I arrived in good time for the start of proceedings the next morning, expecting frenzied activity.   That didn’t happen, but gradually a stream of visitors kicked their way through the leaves, emitting looks and comments that implied approval.   Days two, three, four and five arrived and ended in the same fashion, and my stock remained on the wall with two small exceptions.

There were some things to hold onto.   As much as I admired and approved of the work of the artists around me, they did of mine.   I received the most glowing endorsements of my efforts from some highly regarded artists, and this helped to offset the disappointment of not having made a fortune.   As I took down the pieces that the public had seen but spurned I knew that my work had been enjoyed by many even if they hadn’t decided to take it home, and I knew that there was value in what I do.   As much as anyone wants to see a financial return on effort, my disappointment was tempered by all the wonderful comments I’d received.   Art and income are not necessarily synonymous.

So.   What next?   Will I go back to Art in the Park?   Should I participate in the Hilton Arts Festival if accepted?    Should I try to make the internet work for me?    Indeed, should I try to carry on at all?   I just don’t know.   The first decision will be made if I’m accepted at Hilton.   And in the meantime, does it make sense to add to my repertoire, to extend my portfolio?

I’ve decided to carry on doing the things I love.   I’ll photograph whatever looks a likely subject, seeing it my way and presenting it that way.    I’ll record whatever catches my eye and add it to my list.   All these things will be for my personal enjoyment, my own pleasure.   But.   I shall also continue to present the beauty of our surroundings to the public, and if there’s an income to be made, that’ll be fine.   We live in a dreary world, beset by anarchy and violence, and my camera makes just a tiny difference. 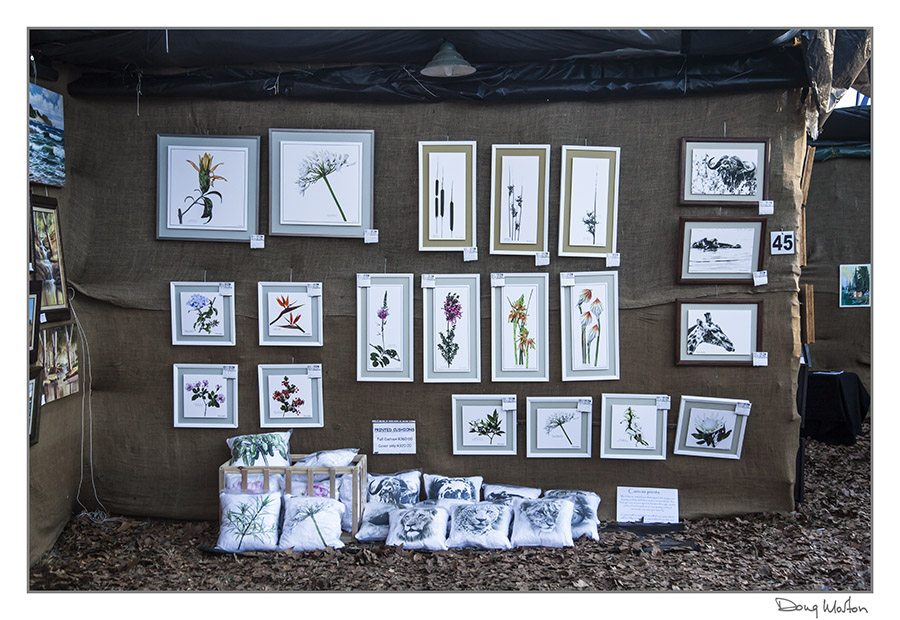 Great blog Doug and i feel your "pain". Please don't be discouraged, you already know this, your work is great. People have limited resources these days and it has become extremely difficult to get them to part with what little they have. We have noticed this in our business and we often find ourselves saying "Why do we do this". Markets, exhibitions, its a tough way to try make some extra cash. As I say to friends _ "We plod on rewardless". If you decide to do Hilton, throw a few of your Nguni onto the wall, maybe some of those well to do farmers will make your day. Keep going friend, it will get better.

hey Doug, loved your exhibition and I definitely thought your quality was equal to the standard required. My take is that we live in KZN, possibly the least artistic of the provinces in our fair country. Art appreciation is confined to a very small percentage of this provinces population and, alas, it shows in the attendances and purchasing of art. Further to that point, I also believe that a small number of art patrons here in SA view photography, no matter how good, how well presented, how 'artistic' as art. I know how you feel, my only photographic exhibition was well attended yet financially... well... say no more... fortunately the day was saved by a restaurant who bought over 50% of my images down the road.... In my eyes, do the Hilton exhibition, and where ever else you can... get your name out there...and it is your passion, so enjoy...be persistent, you'll get there...

Beautifully expressed. The words "What a joy it was to see the product of my imagination and the splendour of nature spread out on the table before me", say it all. Keep doing what you love and do so well.

Continue doing it, showing it and writing about it, as long as it's fun. I think what you do is awesome and I enjoy seeing it and reading about it.

Don't ever give up what you believe in, or on the things you love. I cant tell you the number of times (when I was stuck to my chair in a dismally boring office) how much joy your images have brought me. To see the silly yellow sunflower take over my whole screen, or the simple little black eyed Susan, The Aggies! Coral tree and the Protea. Ahh! They are all engraved in my mind. You have a real talent my friend, and I still strongly believe that when you find the right market, they will fly off the shelves.