For many decades the little city of Pietermaritzburg bore the nickname “Sleepy Hollow,” and in some respects that was fully deserved.   It was an unremarkable town, one of those that motorists drove through on their way to annual holidays and then again on the way home.   There seemed to be no attractions that would lure tourists, and very likely this was the way that the residents of this quiet provincial capital preferred things.   Many quaint features that testified to its former years were almost unique, but were themselves disappearing one by one to live on only in the long memories of the older citizens.   The city’s place in the Midlands of Natal was eminently apt.   All was old world, as much as it could be in this corner of Africa, gardens replete with azaleas, rhododendrons, roses and hydrangeas of a range of colours.   Tall trees lined the quiet roads and lanes, and traffic was slow and sparse.   This was indeed a sleepy hollow.

In one important respect, though, the city was important.   Its architectural heritage, a mere fledgling by comparison with other parts of the world, spoke of the influence of the great architects of the British Empire in much the same way as Sir Herbert Baker was to produce the famed Union Buildings in Pretoria.   The village was characterised by the use of its own “Maritzburg red bricks” that had been the principal component of so many civil and private buildings over the years.   The City Hall itself, reconstructed after the disastrous fire of 1895, remains the largest all-brick building in the southern hemisphere.   A stroll along the streets of the inner city and some of the less central areas today will still reveal the stamp of the bricks that became renowned in the small world of Pietermaritzburg architecture. 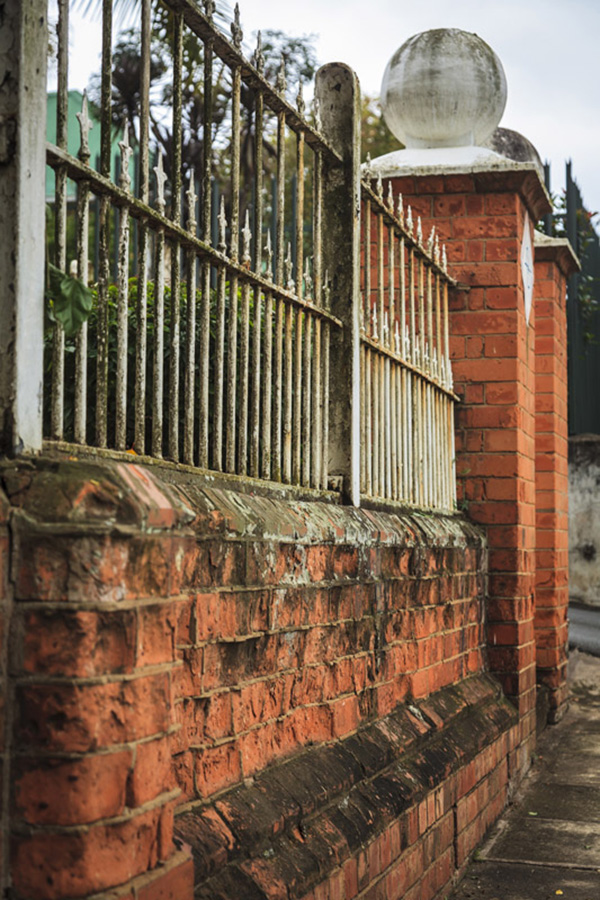 One of these surviving structures is the well-known Diamond Jubilee Pavilion in Alexandra Park near the heart of the town.   The lovely pavilion overlooks one of the most attractive cricket grounds in South Africa, ringed as it is by longstanding Plane trees that echo the crack of leather on willow as clearly as would happen on any village green in the world where cricket is played.   The ground snuggles into a meandering bend in the Msunduzi River that lazes by, and is flanked on the opposite side by Alexandra Park with its gardens and rockeries, a picnic area, a cycling track and a few football fields.   The entire feel of the park is deeply British-royal, with road names like Park Drive, Balmoral Drive, Princess Elizabeth Drive and Princess Margaret Drive.   One might be forgiven for thinking that a prime patch of England had been exported lock, stock and barrel to the little city in the old colony of Natal. 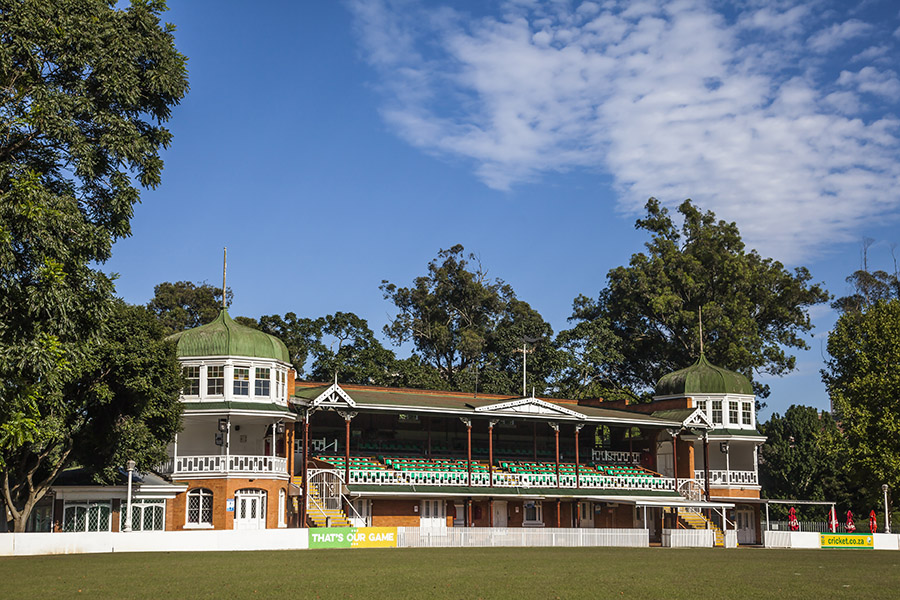 The cricket ground has been host to first-class matches for many years and continues in this function today.   Some world famous cricketers have strutted their stuff in front of the pavilion, notably in two Cricket World Cup matches played there in 2003.   Other legends of the game like Barry Richards, Vince vd Bijl and Mike Proctor also graced the fair space with their talents and exploits  For a number of years the venue was used as the finish for the Comrades Marathon up-runs and saw most of the world’s top long distance runners in action while also witnessing the agony and the ecstasy of the less gifted but equally determined athletes.   The ground and its pavilion also featured as a location in the filming of the 1979 movie, Zulu Dawn, serving as a backdrop to the British Army camp in Pietermaritzburg, again hosting world figures such as film stars Peter O’Toole, Burt Lancaster and many others. 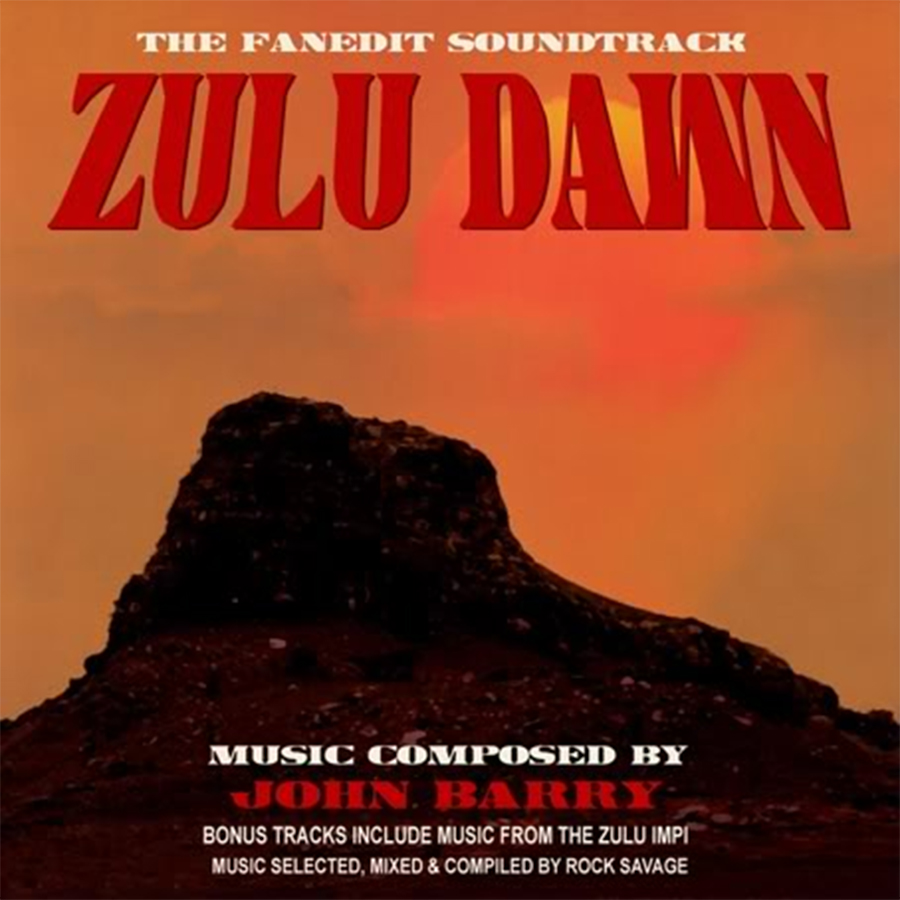 Alexandra Park was established in 1863, named after Denmark’s Princess Alexandra who that year married England’s Prince of Wales, Prince Edward, who would later become King Edward VII, his wife to become Queen Alexandra.   Construction on the pavilion was begun in 1897 to commemorate Queen Victoria’s Diamond Jubilee that year, and was completed in 1898.   It is still known as the Diamond Jubilee Pavilion, and has not been subjected to alterations that damaged its lovely character.   Some additions were made at the rear of the biulding, generally sympathetic to the styling provided by architect W Lucas.    As is usual in present times in our lawless society, the building is sadly festooned with floodlights, cameras and other contraptions intended to keep it and its contents safe. 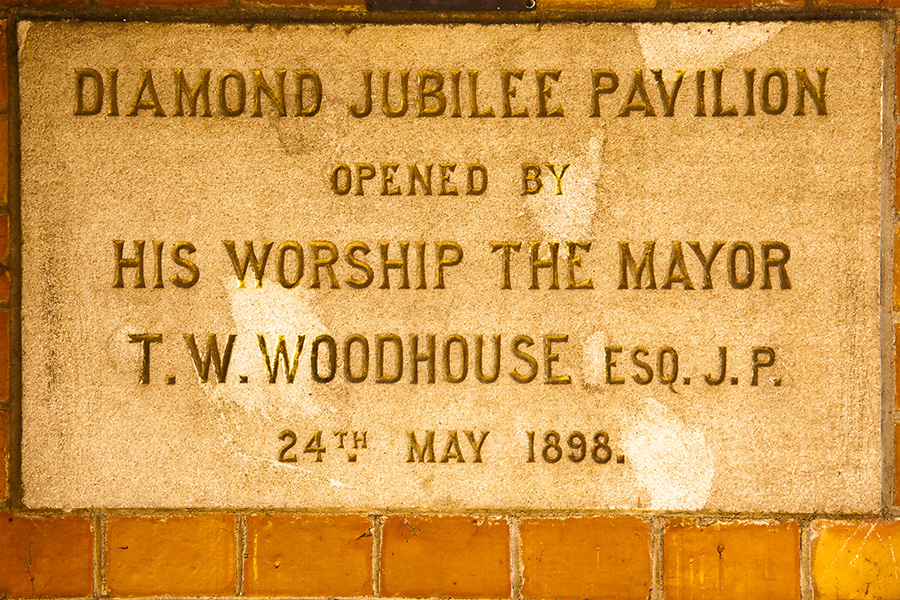 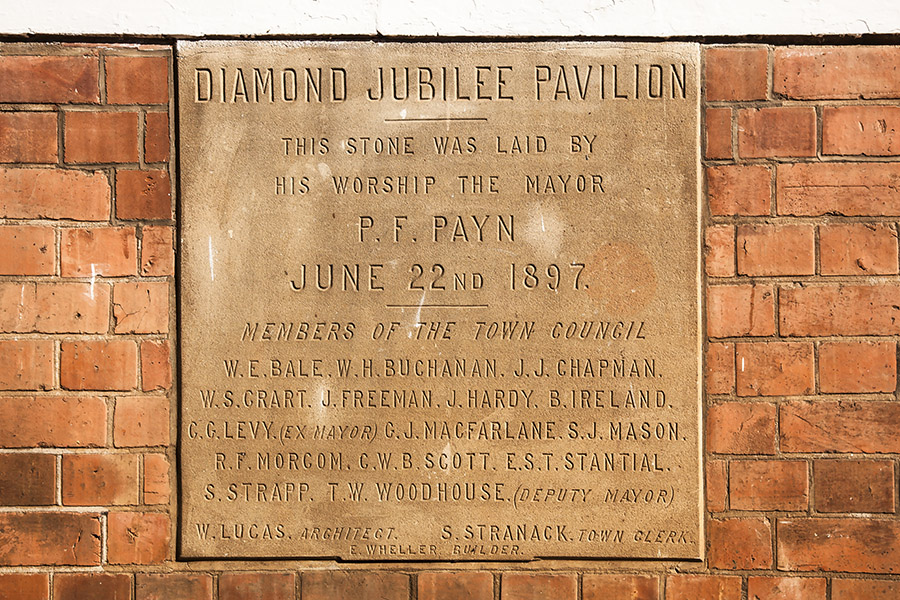 The cricket field is one of just three first-class venues in the world to have a tree growing inside the field of play.   This odd situation has been accommodated by a realignment of the boundary line around the trunk, with a sign explaining the terms and conditions that apply in the event of a ball hitting the tree.   These curiosities help to make the game so much more interesting, and also add to the individual character of the venue.   Some of the open spectator stands are located behind the trunks and foliage of the old Plane trees, making a day of watching cricket very frustrating for some unlucky visitors. 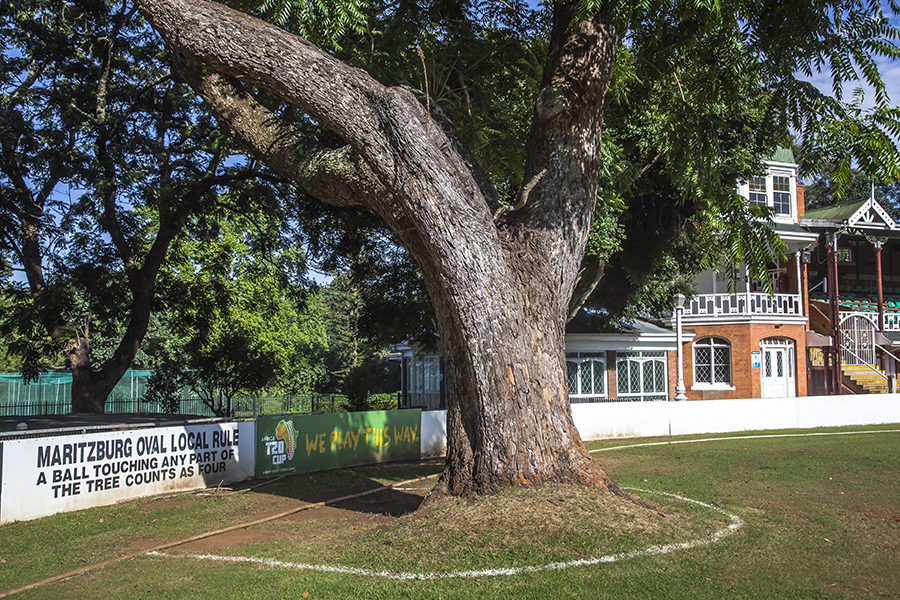 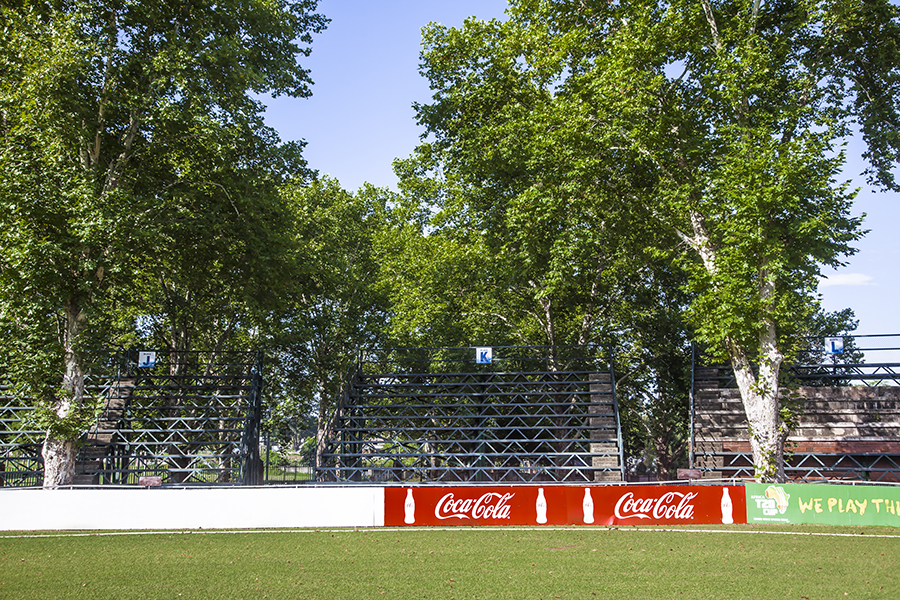 One of the outstanding characters of the game of cricket, Pietermaritzburg’s own son, Jonty Rhodes, appeared on this field many times.    In recognition of his services to the game one of his exploits was used to create a tribute to this great Proteas player.   In the 1993  World Cup match against Pakistan in Australia the then little-known player ran out the ace Pakistani batsman, Inzimam ul Haq, by diving onto the stumps with ball in hand.   It was probably the moment of the entire tournament, and the local municipality in Pietermaritzburg cemented the memory of that dive with the Jonty weather vane that adorns the roof of the pavilion. 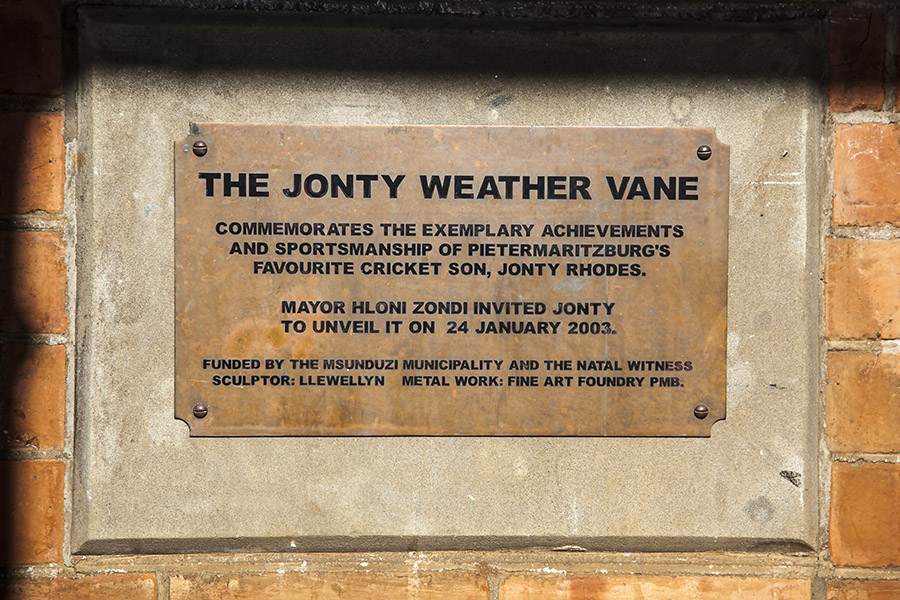 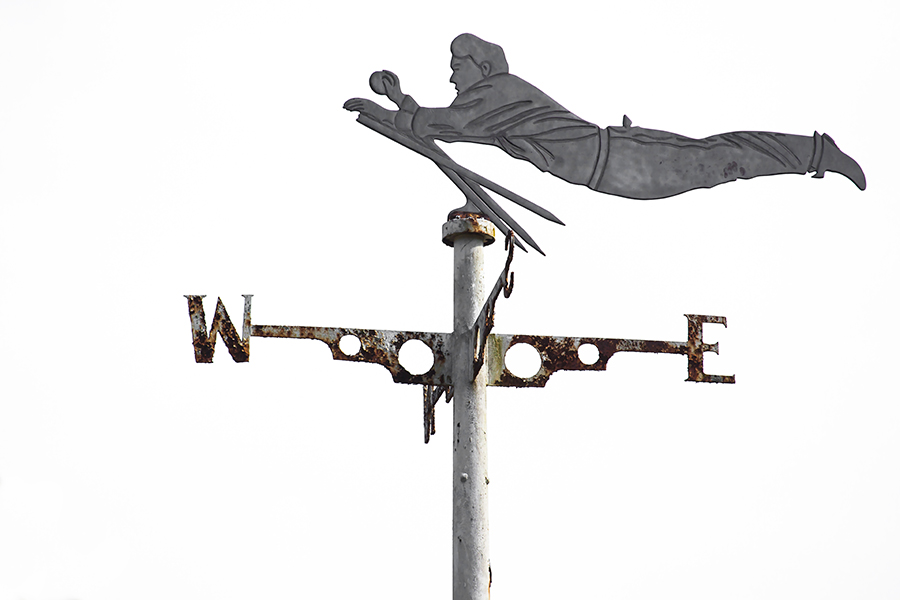 A small tea room or restaurant had been added to the pavilion and became popular with the city’s residents, particularly for Sunday lunches.   There were several operators of this eatery, one of the last being Mike Elliott and his lovely wife Moira, who had owned or run a number of excellent catering establishments in the town over many years.   The restaurant has now stood vacant for some years, and its demise has been a loss to the entire community of Pietermaritzburg. 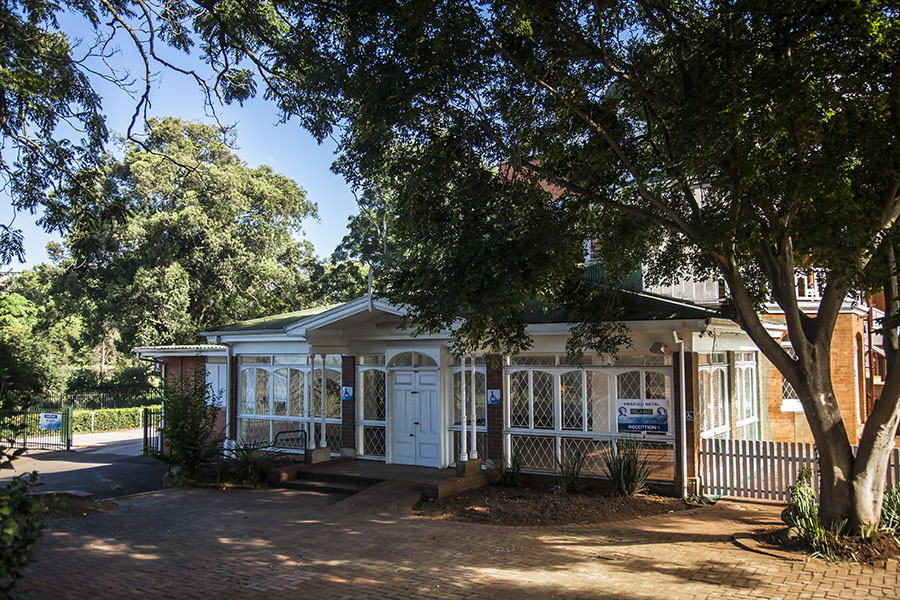 In January of 2009 the historic "Chinoiserie" bandstand that stood next to the pavilion was destroyed by a freak storm.   The wreckage was gathered and stored by the Msunduzi Municipality for future restoration, and in November of that year the decision was made to go ahead and funds were allocated.   There had been counter-proposals to erect the structure in other parts of the city centre, but all suggestions, including the reconstruction, came to nought.   The material has since been lost, possibly to scrap metal dealerships, and the funding issue was clouded in political argument.   All that remains of the lovely building that provided a venue for many Sunday afternoons of entertainment are some snapped-off cast iron posts and a crumbling circular brick plinth.    That so many items of the architectural and art heritage of this young city should be allowed simply to vanish due to incompetence and indefference is a tragedy. 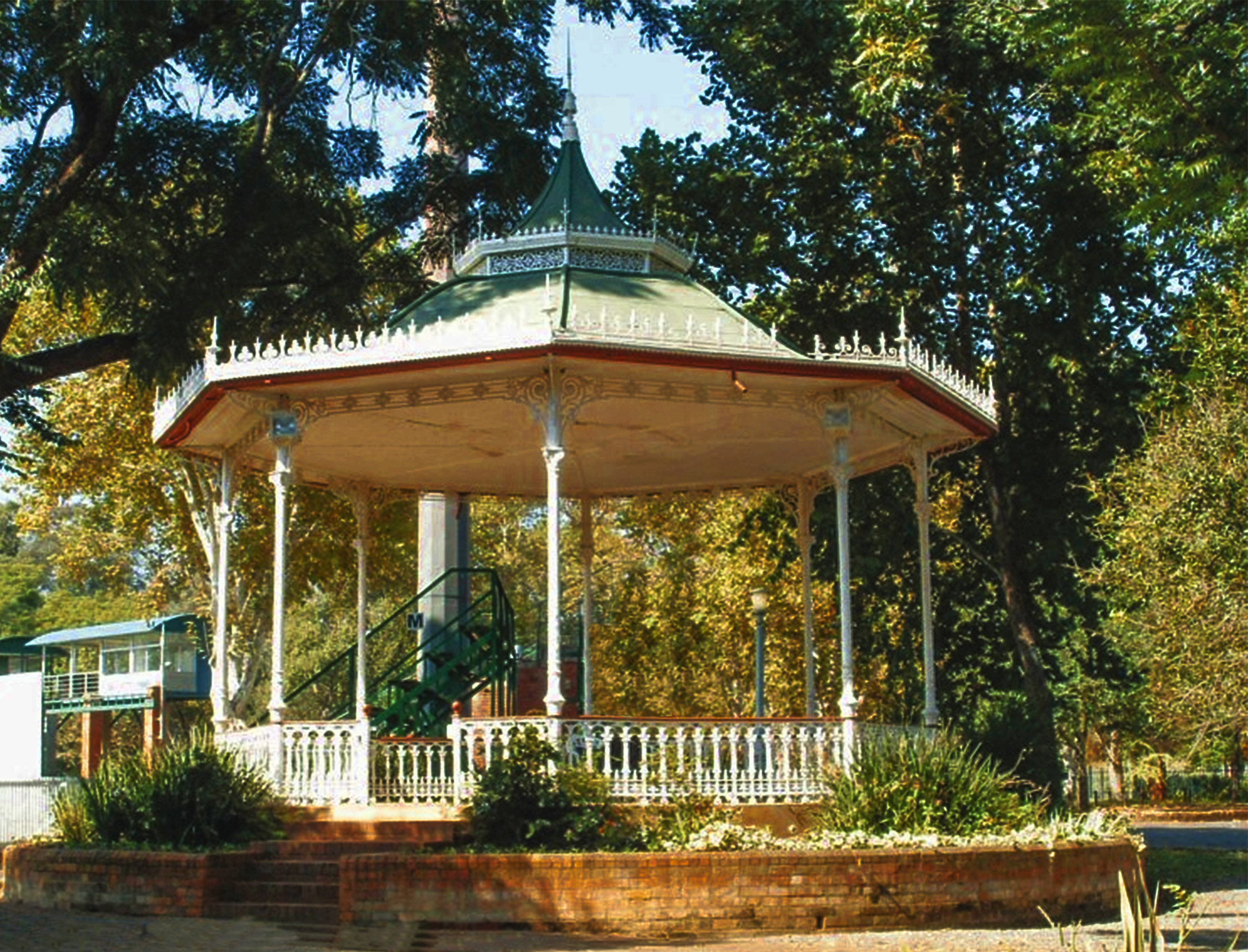 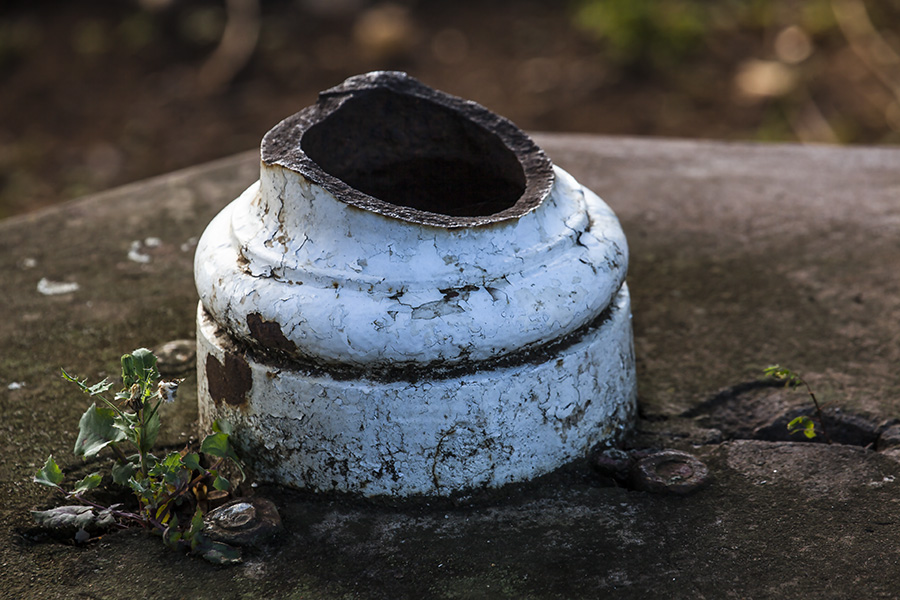 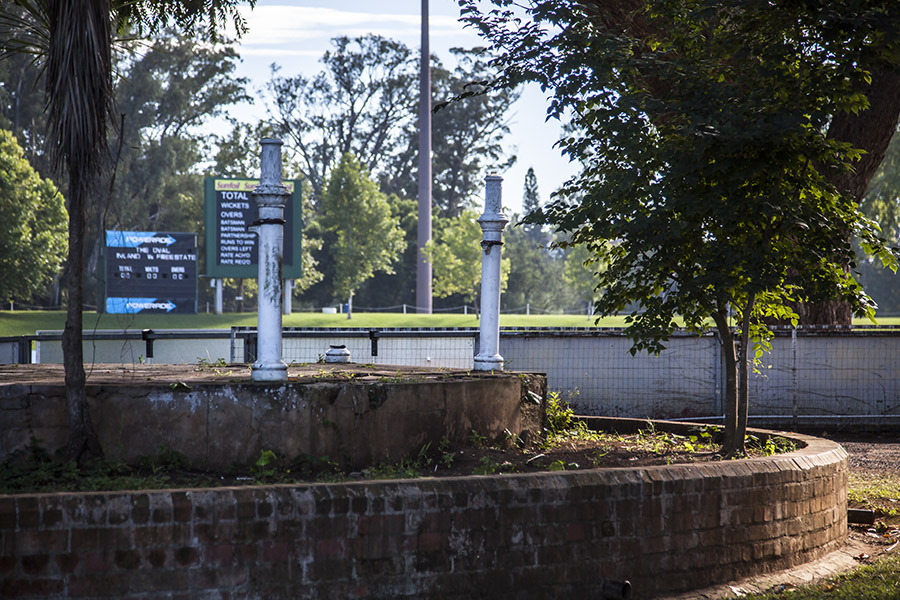 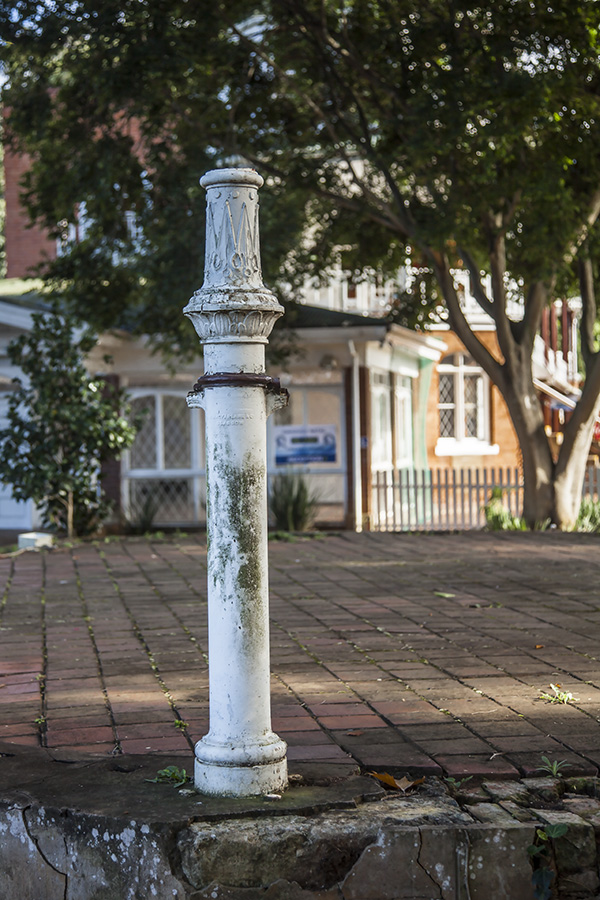 Sadly the park is quite run-down nowadays, but even if the past can be obscured, it cannot be erased...   There must be many stories and anecdotes about the people who have featured in the tale of the pavilion, but these dim with each passing year, and little effort is made to preserve the treasure.   This is the case in all communities, but is especially sad in a small town where until recently, everyone knew almost everyone else.

But times do change.   Even in Sleepy Hollow.

Absolutely stunning Doug, thanks for sharing!

Wow Doug, if you had produced this beautifully written and photographed piece when I was living in PMB way back, I would have taken a lot more interest than I did then! What a wonderful record of bygone times.

Nice one Doug, at least someone records and takes an interest in our history.

Well done - as ALWAYS, Doug..! I have never been to these lovely grounds but your words and pics certainly bring true tribute to such a splendid park. Wonderfully captured...... Fond regards to you and Terri Neil

Nice article Doug - and I had no idea Jonty had been honoured with that weather vane. Really good to see that.

been there many times, but was un-aware of a lot of the history, thanks Doug..

I enjoyed the read - as always- and wondered to myself what will it look like in 50 years time. So sad that there is so little interest in preserving old buildings etc etc.

Another brilliant walk down memory lane. Thank goodness for your love of Pmb History otherwise we would have nothing to remember. It is indeed very sad that so much is being lost by a generation who just don't give a damn. Lots on info here I did not know like Zulu Dawn, the tree and Jonty's weather vane. Thanks Doug, a great read - as usual.